130 students from around the world, half of which were Indigenous, completed the voyage with 80 climate scientists, geologists, historians, political advisors, Inuit Elders, and musicians, to see firsthand the impact of climate change on our planet’s landscape and people.

“I’ve been interested in climate change since I was a child,” says Alaistair, who in his first year at UTS in F1 (Grade 7) organized at screening of Sea of Life for World Oceans Day and invited WWF Peter Ewins to speak. It was Peter Ewins who first introduced Alastair to the Student on Ice program, and with the support of UTS History teacher and History Bowl coach Vince Dannetta, Alastair took on the rigorous application process. 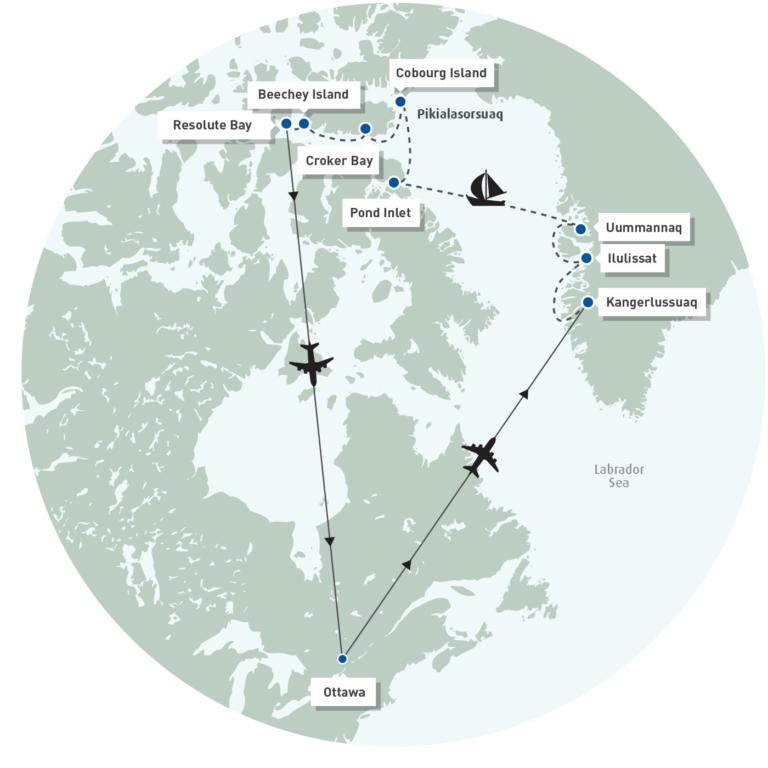 The expedition began in Ottawa, and from there students flew to Kangerlussuaq, Greenland and set sail on the Canadian research ship Ocean Endeavour to discover the communities, fiords, bays, and islands along the country’s west coast before sailing across the Davis Strait.

"One of the highlights was Tallurutiup Imanga. I got to meet Prime Minister Justin Trudeau and Environment Minister Catherine McKenna, who were announcing the creation of the Tallurutiup Imanga National Marine Conservation Area," says Alastair. This announcement put Canada past its 2020 target of protecting 10 percent of the nation's marine and coastal areas.

"I also saw some slightly disturbing things, like how on some days we were able to walk around in shorts and t-shirts, which really shows the effect of global warming." Today, Canada is warming at twice the global rate, with northern Canada warming at three times the global average. The same month Alastair was in Nunavut, the temperature in Alert (the northernmost permanent settlement on Earth) recorded a high of 21 C for the first time in history.

On his excursion, Alastair witnesses melting glaciers and eroding ice. He also took part in workshops on geopolitics with professors and witnessed Intuit storytelling and Greenlandic Mask dancing.

This overlap of fields like climate science, history, culture, and heritage provides a comprehensive view of the impact of climate change. For Alastair, witnessing firsthand the challenges that arctic communities face was a great motivator toward action, and the excursion was a valuable contributor to the appreciation of the complexity and importance of reconciliation between Indigiengeous and non-Indigenous people.

The interconnectedness of these fields is reflected in Alastair's multifaceted experience as a UTS student. Alastair, an active participant in UTS Speech and Debate, History Bowl, and the Indigenous Solidarity committee was able to bring his wide range of interests and experiences to the program.

"Personally my absolute favourite thing about UTS is all the clubs, all the teams we have here. No matter what your interests happen to be, there is something for you to do and you can explore your passions."

Now back home, Alastair is continuing his commitment to climate action, and is already arranging a number of presentations at community centres to talk about his experiences.

When asked about ways in which everyone can participate in climate action, Alastair encouraged people to look at their individual choices, as well as the important roles that political activism and corporate responsibility play. His advice: "Talk to people. Invite speakers. Make connections." He himself sees a future for himself in the fields of history or political science, and has already been in contact with his MP.

"This experience is going to be useful to any field I go into."

Looking for more news and updates from UTS?

University of Toronto Schools offers a transformative education to high-achieving students in grades 7 to 12.